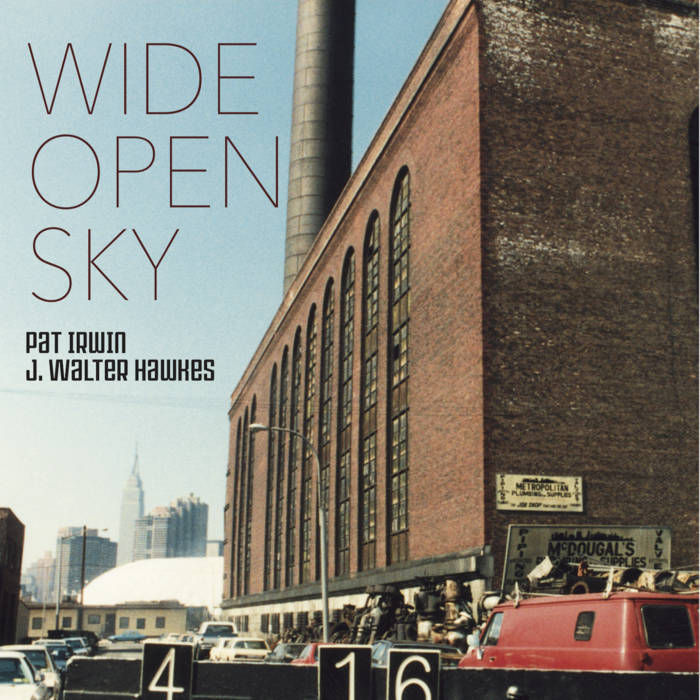 World of Echo Chill and nifty duet album between trombone and guitar (plus some spare electronics here and there). I love the trombone melodies throughout (and, hey, I just love trombone--I've always liked the low instruments, e.g., bass, cello, trombone, bass clarinet, etc.). Don't sleep on this.

"It was like looking out at the sky in North Platte, Nebraska or something," says guitarist/composer Pat Irwin.

Surprisingly, Irwin is referring to Long Island City, a New York neighborhood and longtime artist enclave nestled directly amongst several blocks of industrial buildings across the river from Manhattan --- probably one of the last places on earth you'd expect people to even look up, much less draw comparisons to the vastness of the American West. But, much like the unusual urban vista that inspired its title, Wide Open Sky, the debut guitar-trombone-synth-electronics collaboration between Irwin and trombonist/composer J. Walter Hawkes, takes us to vantage points we wouldn't get to appreciate if it weren't for intrepid artists like Hawkes and Irwin.

Though Wide Open Sky is something of a descendant of the jazz duet album format, it also represents an intersection of two contrasting, at times even contradictory, approaches to music. Pieces like "Radiate," the title track, and "For A Dance" follow a trombone-guitar duet format based on pen-to-paper compositions. Others such as "Automatic 3" and "On the QT" were borne of a more contemporary production method using instruments from Hawkes and Irwin's collections of vintage/found and built electronics. Tracks like "In Another Time" fall right in the middle.

On the face of it, one might expect that Irwin and Hawkes would have quite a bit of musical language in common. Irwin, a founding member of legendary underground acts The Raybeats and 8 Eyed Spy, as well as an 18-year touring member of The B-52s, has composed music for Nurse Jackie, Bored To Death, Rocko’s Modern Life, and SpongeBob SquarePants, to name just a few. Meanwhile, Hawkes, who's played with Norah Jones, Elvis Costello, Madeleine Peyroux, and Richard Julian is a four-time Emmy winner with myriad scoring credits including Peg + Cat, Wonder Pets, and Blue’s Clues. Their paths initially crossed in 2005 when Hawkes brought Irwin in to contribute some music for a series titled 3rd & Bird. Later, Irwin conscripted Hawkes as an orchestral musician for Bored to Death.

The truth, however, is that Irwin and Hawkes, longtime neighbors who still live walking distance from each other's apartments and studios, actually had some difficulty finding common ground when they were asked to come up with material for a Long Island City arts festival in 2010, playing their first duo gig in a vintage car garage. With a shared passion for vintage electronics and a common desire to do something unconventional, both intuitively understood that they'd reach a fertile meeting ground between their respective approaches.

"I'd seen Walter play," Irwin recalls, "but not actually all that much. It was a leap of faith."

"Yeah, that sounds right," Hawkes chuckles. "It definitely put me out of my comfort zone as well," he adds. "I've gotten a lot of my work because I've got a pretty vast repertoire of traditional jazz tunes in my head. This is definitely not that."

Both had to come up with new ways of thinking for their respective mentalities to align. To a certain extent, though Wide Open Sky lands beautifully in that liminal space between composition and improvisation, the pair is still finding its way to a new shared vocabulary, and that ongoing exploration is part of what makes this debut album so exciting.

"Walter brought out a side of me that I'd never tapped into before," says Irwin. "He allowed me to be myself, and he was patient. He gave me room to grow as a composer."

"I play completely differently in this situation," Hawkes chuckles. "I'm certainly not depending on my J.J. Johnson licks!"

"At the same time," says Irwin, "we were inspired and excited and had this sense that we were going to land on our feet someplace that was unfamiliar and a little exotic to both of us. We'd both written plenty of music for cartoons, but now we were writing for each other. Playing guitar with just myself and Walter on trombone was something completely new. All of a sudden the music I was making felt totally exposed and vulnerable -- and that was a thrill that ultimately led to some beautiful discoveries."

For inspiration, Hawkes turned to a series of homemade cds that Irwin made using discarded instruments he'd sourced from the street. One of those instruments, a large console organ Irwin found abandoned by the Long Island Railroad tracks, also appears on Wide Open Sky.

We've all heard countless musicians romanticize New York, but none of them have put together a portrait quite like this. One doesn't have to be from New York to appreciate the mournful undercurrent that threads through the record's quirky blend of classical composition, experimentation, and antiquated technology. In many ways, Wide Open Sky is an ode to a neighborliness and congeniality --- to being elbow-to-elbow with people you don't have much in common with --- that's being swept away by the forward rush of change. Long Island City, in fact, was officially recognized in 2017 as the fastest-growing neighborhood in the United States.

"When I moved here in 2001," says Hawkes, "if you told me that I'd have four ramen places to choose from that were all amazing, I'd have laughed in your face."

"Since we started this collaboration," Irwin adds, "it's like we're being walled-in. When I first came out to Long Island City in the early '80s, it was like it had been forgotten; nobody was here. I'd lived in Tribeca and New York was pretty dark. I loved it, but it kept getting darker. The music scene that I was a part of was pretty dark too. When I came out to Long Island City it really sort of saved me. The first thing I noticed was the sky. It's just got this unique beauty to it. I can still see the very top of the 59th Street bridge out my window, but you used to walk out and see that view everywhere. It was like open country."

Wide Open Sky owes its very existence to a sense of place. Permeating the music's instrumental pieces is that tension between the intrinsic human need to feel solid ground under our feet and that creeping certainty that all is fleeting. Likewise, in its own way the music reflects the strange -- if haunted -- geometry of industrial spaces once colonized by artists now in retreat from gentrification. Not a new story, by any means, but one that takes on unique expression in the music made by Hawkes and Irwin.

Recorded and Mixed at The Blatobox, LIC, NY
Mixed by Dan Crowley and J. Walter Hawkes
Mastered by Tod Levine at Magnetic North

Pat Irwin (guitar, electronics) was a founding member of the NYC No Wave bands, 8 Eyed Spy and The Raybeats and a touring member of the B-52s. He has composed for Nurse Jackie and Bored To Death, Rocko’s Modern Life, and SpongeBob SquarePants. J. Walter Hawkes (trombone, electronics) is a four time Emmy winner who has played/ recorded with Norah Jones, among others, and composes for television ... more

Bandcamp Daily  your guide to the world of Bandcamp